The emerald ash borer was first detected in Michigan in July 2002 after it was accidentally shipped over in ash crates from China. It is a boring beetle that feeds on all species of North American ash, in the genus Fraxinus. Adults are about half an inch long, slender, and a metallic green color. They normally emerge from ash trees during June or July and leave behind D-shaped exit holes about 1/8" in size. The larvae are about 1 and 1/4" long, white, and segmented. EAB larva feeds on the tissues underneath the bark. As they move around to feed they create tunnels, also known as galleries, which inhibit the tree's ability to transport water and nutrients leading to the death of the tree. We are able to tell a tree has been attacked by the beetle by the symptoms the tree shows. This includes a thinning appearance of the canopy, sprouting from the base and trunk, bark splitting, increased woodpecker activity and the D-shaped exit holes. The adults fly off to feed and lay eggs in another ash tree, thus restarting the life cycle. 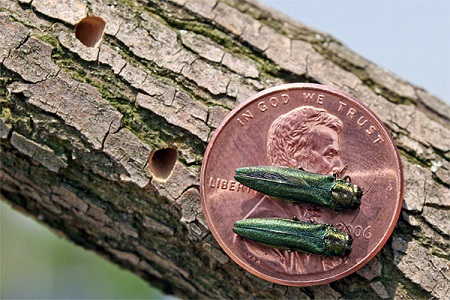 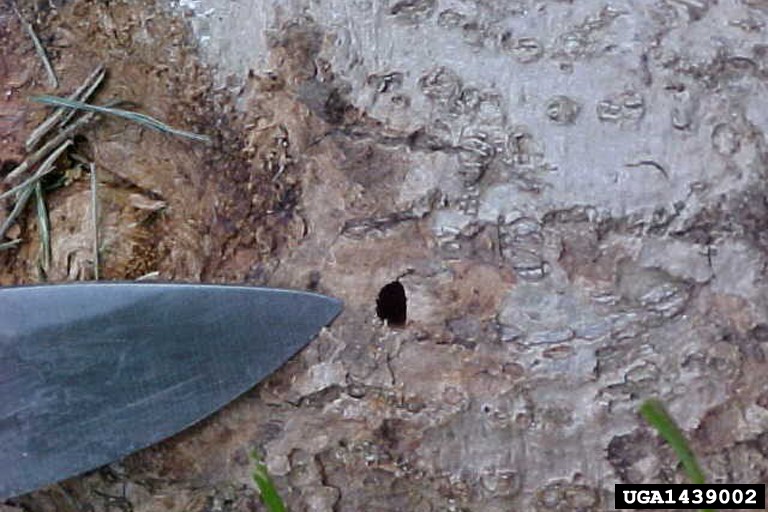 The most common way EAB is spread is by moving ash firewood from infested areas to non-infested areas. Keep in mind that the beetle emerges from the wood in the summer months, so imported ash wood is not certified to be insect free should be destroyed or burned immediately. However, it is preferred that you use locally cut firewood to even further reduce the chances of spreading EAB. This would help prevent EAB from becoming established in South Dakota.